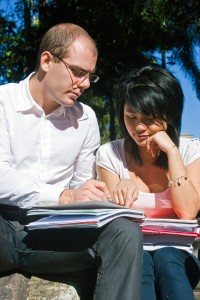 Teach Your Girl English In Thailand? Why Don’t You Teach Her – And Get To Know Her Better Along The Way.

Do People Speak English in Thailand?

There is actually some debate about English in Thailand. If you were to make a visit for a couple of weeks your answer would probably be, “Yes.” But that is because you would most likely go to the tourist areas and English speaking Thais are the ones who get the jobs there.

What Is The Real Question?

The question really should be: Do Thais have a competent grasp of the English language?

The reason this question is asked is because Thais take English throughout their academic lives. Each school has English teachers and the kids take English daily. Knowing that, you might be surprised to see how few Thai actually do speak English in Thailand with any semblance of comprehension.

Does Learning English In Thailand’s Schools Transfer To The “Real World?”

Once you’re in the “real world” of Thailand you’ll notice very few Thais will speak to you in English. You’re left to wonder: Why is that so considering the extensive amount of schooling they have in the subject?

There seem to be any number of answers to that question.

Maybe They CAN Speak English in Thailand!

Thai Girls Study Hard To Attain Some English Skills. But With How Much Success?

With a little cajoling you can sometimes bring them out of their shell. When I ‘m shopping, sometimes I like to encourage the clerk helping me to speak English. I’ll turn to them and say, “I know you take English in school. Why don’t you try to speak it with me?” Inevitably they do reply in English!

How Much Practice Do They Get?

The second reason the Thais don’t speak English well, despite all their schooling in it, is they don’t get much practice. By practice I mean the opportunity to speak it regularly in normal conversation. They may have a classs in English every school day but unless they spend all that class time in English conversations the fact still holds they aren’t getting much practice.

If you spend all you foreign language time trying to memorize words you’re going to learn at a slower rate than someone who is immersed in the language. Talk to anyone who has learned a second language and they’ll tell you living amongst the actual speakers of that language drastically improves your learning curve.

The Thais Need More Practice To Improve Their English in Thailand!

That’s the experience Thais dearly need to improve their English language skills. Otherwise you can understand it’s very hard for them to keep their interest level up. Imagine taking football lessons every day and never getting the chance to play a competitive game. Unless you can test your skills regularly it’s hard to stay motivated.

Can Anyone Learn To Speak English in Thailand?

Finally, I think learning a foreign language takes a copious amount of aptitude. Only a certain percentage of people in the general population can learn a second language with relative ease. The rest of us have to struggle to achieve any competency.

Can Thais speak English? Yes, some of them can speak English well but the majority of Thais have very poor English skills. Unfortunately that’s unlikely to change in the very near future. But don’t let that stop you from having a good time in the Land of Smiles. There are always ways to communicate even if you don’t speak the same language. On the other hand, you could always learn Thai!

Marc Lewis is a 50-year-old Canadian who has traveled the world extensively both on his own and leading student tours. He’s worked as a high school teacher, business executive and photojournalist. Two years ago Marc met a lovely Thai girl online and teaches English in Thailand.