So You Want To Drive In Bangkok – Part 2 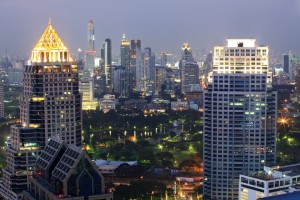 Bangkok Is The City Of Traffic Chaos. You Will See For Yourself When You Come And Drive In Bangkok

When You Drive In Bangkok, Life Will Shock Every Fiber Of Your Being Into Panic Mode. Welcome Back.

We’ve been talking about your Thai friends’ expectation that you will drive in Bangkok. Specifically we’ve been on the topic of death-defying motorcycles and how they affect your driving behavior. Look back at my previous blogs to find Part 1. So what strange behavior can you expect to see from motorcyclists that drive in Bangkok?

Strange Behaviors When You Drive In Bangkok

Understand that when they drive in Bangkok to a Thai Motorcyclist there are no traffic lanes. Anywhere there appears to be enough space for a bike is considered to be a lane for a motorcycle. Most commonly they will whiz by you in your car on either side while you are in your lane and the car next to you is in theirs. They’re small so they can fit into these tight squeezes and they hate to wait. I don’t know where they have to be in such a hurry but the motorcyclists all seem to be in agreement that they don’t have to display any patience on their journey while they drive in Bangkok.

When traffic is stopped they will bob and weave through the stopped four-wheeled vehicles until they find themselves at the front of the queue. By the time the light changes at some Bangkok intersections there will be a hundred motorcycles in front of the first car all waiting to take off like AJ Foyt at the Indianapolis 500. Some will wait for the light to turn green and others will simply judge the relative safety of running the red light early and proceed at their own peril. 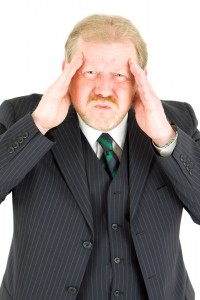 If You Have Trouble While You Drive In Bangkok It Is Sure Better If Your Thai Girl Is With You!

I Hit A Motorcycle!

Last week I took a 45 minute taxi ride from the airport to my condo. Along the way my driver needed to make a lane change. As he drifted into the right lane a bike suddenly whizzed between the cars. The motorcyclist clipped the rear end of the taxi with a hard thud but didn’t stop. He wobbled for a brief moment and then his bike came up straight. Still moving, he looked back at his rear tire and judged his bike to still be operational so he gunned the motor and was soon lost among the scramble of traffic.

When we drive in Bangkok you or I would weave slowly amongst the traffic if we chose to proceed between lanes. Many motorcyclists act if they couldn’t possibly imagine a sudden lane change or door opening amongst all those vehicles. Their speed in that situation is excessive and here’s the kicker…if you were to hit one of them chances are good you’d be considered at fault.

Insanity – You May Discover While You Drive In Bangkok

Not only will the bikes go between the cars who are maintaining their presence in the designated lanes they will also drive between you and the curb. Insanity right? I mean, you’re in the left hand lane, the slow lane, in a country which drives on the left side of the road. Chances are fairly good as you drive in Bangkok you’re in that lane because you plan to make a left-hand turn soon. Yet that same line of thinking seems lost upon eager bikers. They will scream by at top speed between you and the curb no doubt because they sense an opening to get where they’d like to go a couple minutes ahead of time. And they repeatedly pay for their impatience with injury.

Thais never seem to be in a hurry to do anything and seem relaxed in most of our doings with them. The place that great Thai persona fails is on the roadway. When I’m out and drive in Bangkok I see bikers laying next to their bikes with nasty road rash on a regular basis.

No doubt your next question is, “How can I survive in this mess?”
Don’t worry, I’ve got your back. Part 3 is coming soon and I’ll provide an array of tips which are sure to boost your confidence level. It might seem unfathomable but trust me, you can do this and drive in Bangkok!

« What Will Your Thai Wedding Be Like? Part 2/4 – The Morning Ceremony » Live Like A King In Thailand And Take A Traditional Thai Massage