Do You Want To Drive Through Traffic In Bangkok? Jay-Walking V.2 – Part 1 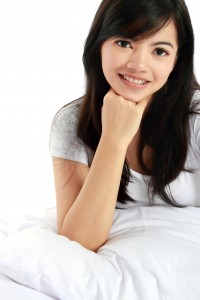 So How Are You Going To Cross The Street With This Kind Of Traffic In Bangkok?

You’ve Adopted The Proper Mindset And You’re Ready To Tackle The Insanity Of the Thai Roadways And Traffic In Bangkok.

Grab your partner by the hand, lead her to the car, open her door and get her seated comfortably. Now you’re off on your driving journey.

What pitfalls should you be prepared for? In volume one we looked at the peculiarities of the Thai motorcyclist. In volume two we’re going to study the habits of the Thai pedestrian. The pedestrian? In a driving guide on traffic in Bangkok? Yes!

Understanding the attitude your girlfriend and her compatriots adopt as pedestrians and toward pedestrians while they drive is critical to your success along the traffic in Bangkok.

PEDESTRIANS – A Guide To Traffic In Bangkok

It would seem the concept of jay-walking doesn’t exist in Thailand. As a motorist you need to be prepared. Pedestrians will appear suddenly from any and all directions. They are a trusting lot. It’s not unusual for them to step directly in front of your car even though you’ve shown no signs of slowing down and given no indicators that you’ve seen them.

It’s hard to understand where that trust comes from. It’s not like Thai drivers have any special courtesy toward pedestrians. In fact, Thai drivers aren’t courteous at all toward pedestrians. Traffic in Bangkok will only grudgingly slow down when it’s obvious there is no other choice other than running the pedestrian over. You need to be prepared to deal with the unpredictable Thai pedestrian.

Thais Walk Across Six Lanes Of Busy Traffic In Bangkok

You will regularly see Thais on foot trying to cross six lanes of busy traffic in Bangkok. In western culture this is a nearly unthinkable act. As children we are taught the dangers of jay-walking. On top of that there’s always the risk of prosecution if you cross the street where you shouldn’t. In Bangkok, it doesn’t appear jay-walking laws are enforced at all.

The fear of being labeled a jaywalker in our western communities is enough to encourage us to act in a legal manner. We go to the nearest intersection and wait for the correct light to change in our favor or for the vehicles to stop for the signs and allow us to proceed across the roadway in relative safety.

Jay-Walking Is A Foreign Concept 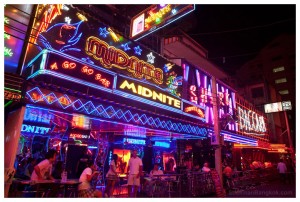 It doesn’t seem that same conditioning exists in traffic in Bangkok. Young and old, rich and poor, Thais from all manner of life love to gamble on the roadway. If they need to go across the road then they just go ahead.

Now keep in mind we’re not talking about the rural roads of Thailand where crossing the road wherever you like is an expected occurrence just as it would be in any rural area in the western countries. No, I’m talking about the busiest multi-laned streets in the biggest cities of Thailand. The only streets I haven’t seen Thai pedestrians try to cross are the tollways and I’m willing to bet that’s because I just haven’t been there yet they’ve tried.

Where will you see Thais on the roadway? How should you react when we’re in traffic in Bangkok? Most Thais try to cross the road in one of two ways.

The first method is to cross all the lanes going the same direction at the same time. Then they will wait in the middle of traffic, median or not, until the lanes on the other side of the road open up. They usually wait along the shoulder until they judge the traffic is light enough to get to the middle and then they make their move.

Of course this means that often times as you’re driving there will be people standing in the middle of the road, some of whom will be gorgeous Thai girls, which can often be distracting and dangerous.

A Mouse In A Maze

Even more dangerous are the braver pedestrians who can’t be bothered to wait for the three lanes on their side of the street to open up. They use the second method. They simply walk out into traffic in Bangkok and weave their way among the moving cars. In this way they make their way across the busy roadway like a mouse in a maze.

How should you react? Working under the premise you don’t want to hit anybody, which by the way doesn’t seem to be the premise most Thais use, proceed with caution. If the traffic in Bangkok is moving, move along with it but be prepared to come to a stop if a pedestrian steps in front of your vehicle which they will sometimes do.

A crossing pedestrian will wait and look at each vehicle. I think they try to see the face of each driver so they can judge who might relent and allow a pedestrian across their lane. If they decide that person is you then they put their faith in karma and walk right into your path. Noticing these crossing pedestrians ahead of time will allow you to make a controlled stop instead of a sudden stop that could put yourself and others at risk.

Do you want to read more on traffic in Bangkok? Read the other parts of this series: Part 1, Part 2

Now you understand how to react to pedestrians crossing the road in traffic in Bangkok. It may seem unsettling at first but eventually you learn to relax and just go with it. It becomes second-nature after a while. Of course, there are other things pedestrians do you’ll want to keep an eye on. What are they? Come back for my next blog about traffic in Bangkok to find out.

« Strange Facts About Thailand: Can You Watch Western Sports In Thailand? » What Will Your Thai Wedding Ceremony Be Like? Part 4/4 – The Evening Ceremony