Facts About Thailand: What’s Happening With Floods In Bangkok 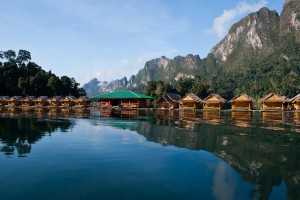 Facts About Thailand – Thailand is A Country Of Swamps. And Floods In Bangkok Can Be Severe.

What’s Happening With Floods in Bangkok?

Did you know Bangkok is sinking? It’s been sinking for a long time. That fact may have contributed to the severe floods in Bangkok last year. There were a few factors involved in the flooding of Thailand’s capital city but it was definitely aggravated by the fact Bangkok lies a mere 1-3 meters above sea level.

The Venice Of The East 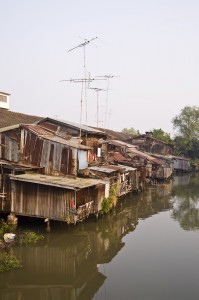 Facts About Thailand – Imagine If This Filled Up With Water. How Would You React With Floods In Bangkok?

As the city has modernized many of these canals have been diverted or paved over. They aren’t as efficient as they once were. On top of that, as the city grew into a sprawling metropolis the swamps that acted as a reservoir for excess water have disappeared.

A City Built On A Flood Plain? – Cause For Floods In Bangkok

Bangkok is only about 30 km from the sea. The Chao Phraya river flows right through the heart of Bangkok and down to the Gulf of Thailand. Like the famous cities of New Orleans and Amsterdam, Bangkok lies in a flood plain.

When the rainy season comes the Chao Phraya River swells with water. The canal system is over-loaded. Floods in Bangkok are always to be expected. However, last year there were excessive rains up north that had to make their way to the sea and Bangkok lay right in their path. The current flood control system couldn’t handle the deluge.

Are There Other Factors In The Floods In Bangkok?

A city of 12 million people puts a huge drain on the natural ground water system. As the water is removed the ground begins to fall. Bangkok has taken measures to put less burden on the ground water take of the city but even so experts estimate Bangkok sinks anywhere between 1-10 centimeters a year.

Now you’ve got a low-lying city, excessive rain water trying to make it’s way to the sea, and an antiquated flood relief system. You can see why the potential for severe floods in Bangkok is ever-present.

Could Anything Make It Worse?

That’s not all. The flooding last season was exacerbated by larger than usual tides. When coastal water levels rise the ability of the flood waters to flow to the sea is slowed and the system gets backed up even more. It was like a perfect storm for conditions of severe floods in Bangkok last year.

In addition, scientists say global warming is causing a rise in sea levels. As the water rises Bangkok creeps closer to sea level. If these factors continue unmitigated it’s not impossible to surmise Bangkok being submerged in a meter of water someday.

Should You Be Afraid? 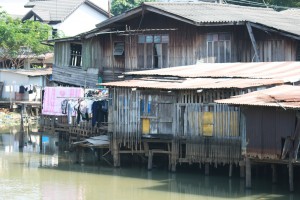 Facts About Thailand – It’s The Slums That Get Hit First, Before The Busy Business District With Floods In Bangkok

Should you be worried? To a certain extent, yes. Should it be enough to dissuade you from moving to Bangkok? No way!

Bangkok is a vibrant and cosmopolitan city. It’s one of the great cities in the world. Like any of the world’s big cities it has it’s issues. But you can deal them.

What Can You Do?

First of all, even during the very large flood of 2011, the main business district and ex-pat areas of Bangkok remained dry. Live in that area and chances are very good you won’t be directly affected by flooding.

If you choose to live outside the main business district of Bangkok you can still be prepared. There was plenty of time for people to recognize the arrival of the floods last time and many people took up residence outside the city until the flood waters abated.

Other people loaded up on supplies and waited it out. In typical Thai fashion they just dealt with what occurred and went on with life. The Thai government is promising to put better flood control procedures in place as well.

It’s A Great Place To Live

Of course there’s always the chance you won’t even live in Bangkok with your Thai girl. Thailand is a big country with many wonderful places to live. Choose a place less prone to flooding and enjoy yourself.

Do you want to read more Facts About Thailand? Read the other parts of this series: Part 1, Part 2, Part 3, Part 4, Part 5

Thailand is a great place to live. The warm weather, lush tropical vegetation and kind people make it one of the truly extraordinary places in this world. As it’s capital Bangkok has a lot to offer. The benefits of living there outweigh the risks of floods in Bangkok any day.

« Live Like A King – With The Exchange Rate In Thailand » What Will Your Thai Wedding Be Like? Part 3/4 – The Evening Ceremony